Reports say that the Chicago Public Schools’ Restorative Practice Policies and Approaches Have Decreased the “Numbers,” but Increased “Havoc and Lawlessness”

Today’s discussion is about the continuing problem, in schools across the country, relative to the disproportionate number of poor, minority, and special education students who are suspended or expelled from school (or sent to the principal’s office, or put into alternative school programs) due to their “discipline problems.”

More specifically, I will first highlight a report published last month by The Center for Civil Rights Remedies that again documents, in great detail, the statement above. This will be followed with comments on a related February 25th article in the Chicago Tribune by Juan Perez Jr. Mr. Perez reported that the Chicago Public School District’s changes, last year, to its Student Code of Conduct, its training in classroom management and use of restorative practices, and its $15 million investment on nearly five dozen vendors to work on school discipline issues with teachers and students has resulted in- - according to one teacher- - “lawlessness.”

In the end, I will outline the student, staff, and school approaches needed to increase students’ interpersonal, social problem-solving, conflict prevention and resolution, and emotional coping skills, decrease their social, emotional, and behavioral challenges, and thereby close the school suspension disproportionality gap.

Now applying Tobak’s quote. . . It is indisputable that poor, minority, and special education students are being disproportionately suspended or expelled from school for “behavioral difficulties” that inconsistently range from minor infractions to major offenses. But it is interesting that different “innovators” are “seeing the same things differently,” and responding (often inappropriately) from somewhat singular, “one size fits all” perspectives.

In actuality, all of these changes are potentially needed. . . but they are often applied randomly, in the absence of sound data-based analyses, as top-down mandates, without the necessary training and resources, and in isolated and (once again) singular and “one size fits all” ways. It’s almost as if we are throwing spaghetti at the wall- - concluding that it’s done when it sticks.

Disproportionality is a multi-factored student, staff, school, and community issue. In order to solve it, we need to “work the problem,” and not just “change the numbers.”

Last month, The Center for Civil Rights Project published a new report (Are We Closing the School Discipline Gap?) analyzing the school suspension data from our nation’s schools during the 2011-2012 school year.

During this school year:

But most importantly, according to the Report:

More Data. Relative to students’ racial, English Language Learner, and special education background or status, the Report provided the following suspension data (see figures below) from the 2011-2012 school year, as well as historically since 1972. 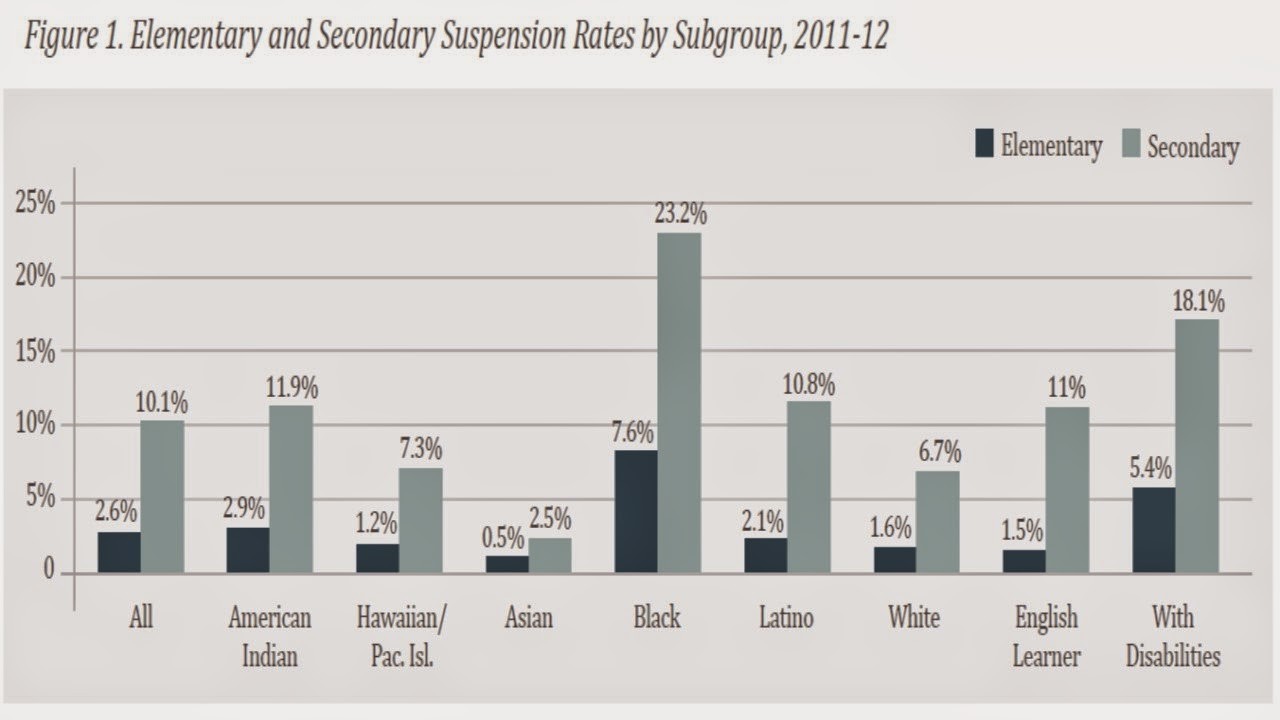 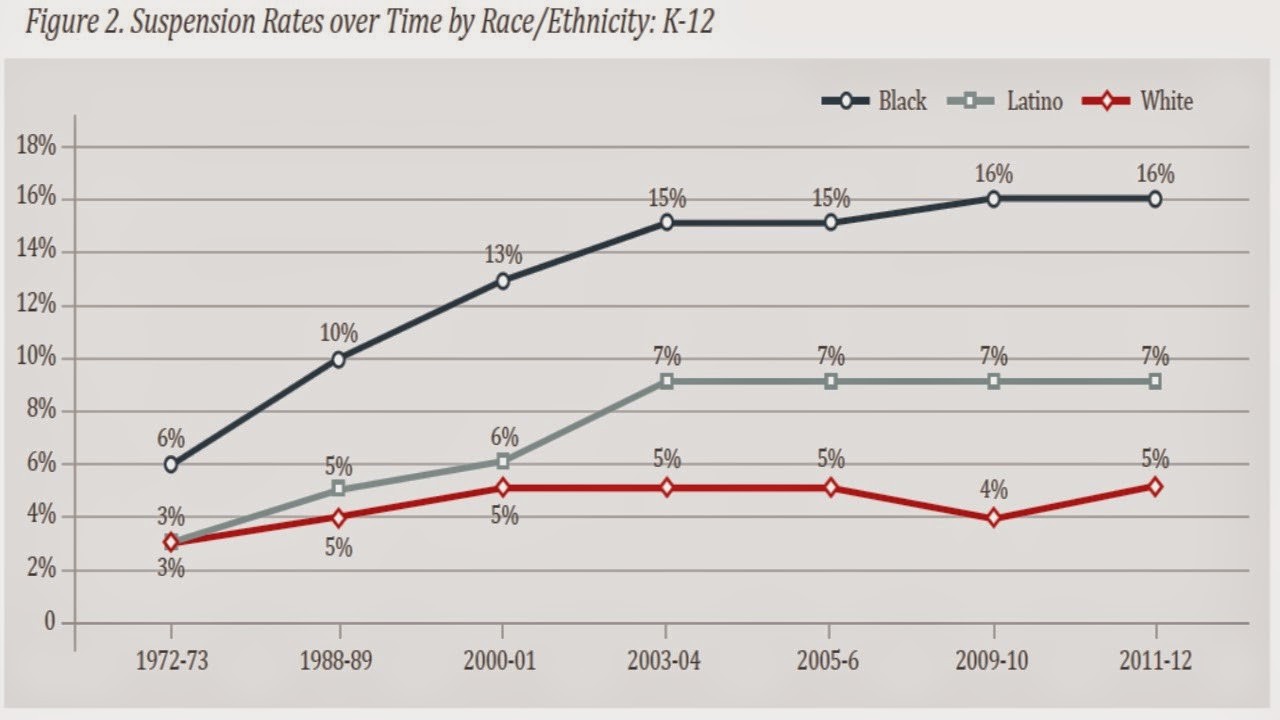 Finally, while the Report identified a number of large city school districts that had “most improved” their suspension rates over time, it appeared that the “improvement” was due more to policy than practice. Indeed, many of these districts did not comprehensively change the systemic practices of staff and administrators in their schools. . . they did not increase the number of advanced skill mental and behavioral health and intervention professionals. . . they did not engage in staff and community outreach programs to increase the understanding and sensitivity to individual student differences. . . and they did not embed their school-based approaches into community-wide social, economic, political, and grass-roots initiatives.

In his February 25th Chicago Tribune article, Juan Perez Jr. reported that the Chicago Public School District’s changes, last year, to its Student Code of Conduct, its training in classroom management and use of restorative practices, and its $15 million investment on nearly five dozen vendors to work on school discipline issues with teachers and students has resulted in- - according to one teacher- - “lawlessness.”

Among the biggest problems cited in the article were the following:

In the end, while the number of in-school and out-of-school suspensions in the District declined between the 2012-13 and 2013-14 school years, racial disparities remained. But once again, the numbers decreased due to the policies that discouraged and/or controlled educators’ use of suspension, not due to increases in students with more appropriate behavior, and decreases in students presenting frequent or significant behavioral challenges.

To set the record straight, please understand that I believe that:

When students demonstrate social, emotional, or behavioral challenges, we need to work together to figure out why. Sometimes this can be done by an individual teacher. . . sometimes this is accomplished by a grade-level (or instructional) team working together. . . and sometimes this requires a school-level multidisciplinary early intervention team (like a Student Assistance Team, RtI Team, Student Services Team, or the equivalent).

Critically, though, everyone in the school needs to be trained in the same problem-solving process that helps to collect and analyze the information and data that determine the underlying reasons for students’ (academic and) inappropriate behavior. Once these underlying reasons are known, specific services, supports, strategies, and programs can be ascertained- - although this means that schools need to have professionals with extensive knowledge in classroom and other social, emotional, and behavioral interventions (so that problem analysis results are linked with the best problem solution approaches).

Some of the primary reasons why students demonstrate social, emotional, or behavioral problems in the classroom include:

Critically, if we do not know the problem(s), we will never identify and implement the solution(s).

To expand on some of the reasons underlying students’ challenging behavior, feel free to watch the webinar below that I presented a few years ago to a national audience:

Finally, as noted earlier, many student problems can be prevented by implementing a scientifically-based school discipline, classroom management, and student self-management system. Based on our 30 years of evidence-based work in this area- - and implementation in thousands of schools in every state across the country, this system has the following interdependent components:

For more information about these components, please feel free to watch this short, ten-minute overview.

It is frustrating for everyone when concerted, well-intended efforts to address major school problems are unsuccessful. Moreover, when these problems get worse despite efforts that actually invest the right amount of time, funds, personnel, and other resources, the frustration often morphs into hopelessness and despair, or blaming and anger. . . along with a more refined resistance to future efforts.

Disproportionality. . . whether related to student discipline, placements into special education, access to effective teachers, equal educational opportunities, or civil rights. . . has existed throughout my professional career (and before). I don’t profess to possess “the silver bullet.” But I do know that our schools are not succeeding by simply changing policies, and throwing “one size fits all” programs at our practices. More importantly, I also know that success can occur by integrating and focusing our policies, practices, personnel, and perspectives on both enhancing the skills and strengths of our students, staff, schools, and communities, and addressing the multi-faceted reasons underlying this important issue.

As always, I hope that some of the ideas above resonate with you. . . or, at least, provoke some deep thinking. Feel free to contact me if you would like to reflect on these thoughts or discuss them in greater detail. Have a GREAT week !!!